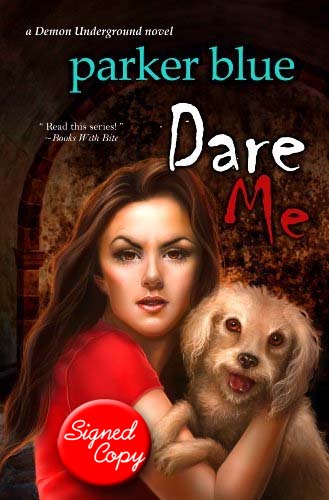 AUTOGRAPHED TO YOU! Val Shapiro has a secret she's desperate to keep--she's lost her slayer powers.

As the new guardian of the Encyclopedia Magicka, Val expected the books to give her powers to replace those that disappeared after she lost her "V card" to Shade. But the encyclopedia exacts a price for every spell, making the job of guardian a tricky proposition.

When a rogue demon kidnaps Val's roommate Gwen and Micah, leader of the San Antonio Demon Underground, Val is plunged into the middle of a Solomon's Choice. The rogue wants the dangerously potent Encyclopedia Magicka in exchange for her friends' lives; the succubus leader of the Demon Underground in Austin is demanding the books be destroyed rather than let them fall into the wrong hands and wants Shade for herself, swearing to do everything she can to prevent Val's turning over the books.

The kidnapping isn't the only crisis Val faces. She's been betrayed by Fang. Demons and vampires are disappearing. The vamps of the New Blood Movement are forcing Val to keep the terms of her agreement to work for them to combat this new threat. The Demon Underground is challenging Micah's leadership, and everyone is depending on a now-powerless Val to set things right.

Val needs all the help she can get. Even if it means forgiving Fang and spending time with a dangerously sexy cowboy-vampire.